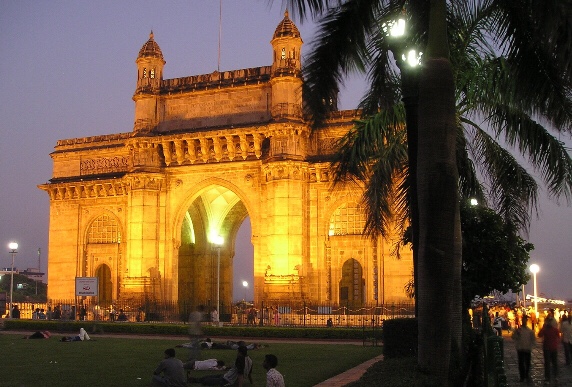 We sailed the Arabian sea that night, to the right the great mysterious continent of India, below the dark oily sea, above the high sparkling spread of Cassiopeia amongst the Milky Way.

Each inch of space was packed, passengers and baggage, in-dispersed with the occasional squawk of a chicken, bleat of a goat or the demanding scream of a hungry baby.

My heart beat joined the heavy regular thump of the ship engine, merging with machine and the wind of passage, like a cooling caress they carring me gently off to sleep.

Three humungous grunts of the ships horn were thrown as greetings, each peeling away into the misty morning haze as we entered the harbor of Bombay. Around us were ships of every shape size and color, before us the red granite of the old harbor wall.

For those of you did not know it Bombay originally was made up of seven islands, first used by the Portuguese in the sixteenth century for its fine deep harbor and only in 1894 with the help of some magnificent British engineering were the islands linked with land fill and a lasting harbor built.

The morning arrived and with it the tension and dynamic of a city that surpassed my wildest dreams and my most fundamental imaginations. To be quite honest, I was completely washed off my feet, bowled over and buried in humanity.

The multitudes, the hordes and infinity of people surging forwards and backwards, here and there, this way that.

It left me, to say the least very confused.

Screeched a young ragged man, shuffling down the aile of the crowded bus. His selling point was unique & horrible at the same time, the ulna and the radius of his right arm were missing . The hand , still intact, shriveled and waxy, swung wildly about as he approached. His Beady eye projected the screeching directly at me, now as I hurriedly dug out the last Rupees in my wallet.

My point of refuge was the Buddha Lounge Inn a simple traveler lodge in the city .Once those protective wooden doors closed affirmatively behind me, I was able to take a deep breath and realize that I was sinking in a sea of humanity.

With my European origin, I simply added to this diversification. The trouble being that my European origins had a strong magnetic effect on the cripples, the diseased, the sick, the homeless (huge quantities of humanity slept on the streets) and the starving.

Begging is a Necessary and well excepted part of Indian culture. Offerings are made all the time at the shrines and temples both large and small scattered throughout the cities and countries side.

I became besieged with the needy and gave away everything that I had.

I felt drained and empty and helpless.