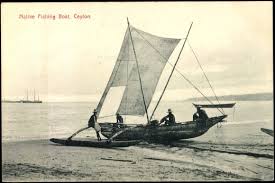 Indian elephants are gorgeous, their small freckled ears, long curling eyelashes and small yet appropriate whisking tails imbue them with the qualities of a ballerina carting a trunk. To watch them stepping down through the jungle on to the beach, youngsters and babies entangled between their legs was hilarious. To my unexpected delight the Kumana National Elephant Park boarders Arugam Bay. Here I watched those grand and gentle creatures splashing around in the wild salty sea, while waiting in the water for swells to arrive.

Up the beach, Singales fishermen pulled their ancient trade on outrigger canoes hewn from a single enormous trunk. The rigging, simple yet effective, a great triangular dart of white canvas tethered for & aft would carry them across the early evening horizon. Each ploughing white creamy furrows of froth and bubbles into the turquoise ocean as they raced home to sell the catch.

Fresh fish was our staple diet. The Ranjit brothers who operated the Suria Beach Hut Accommodation were culinary magicians who, cooking on an open fire, inspired 5star meals day after paradisiacal day. Water was drawn by bucket from a well, while the huts simple construction of tied palm leaves protected one from the sun at day, yet let in the star twinkle between the leaves at night.

“Quick Liam, you’ve got to see this!”

Distracted from my bedtime read, I quickly swatted a blood bloated mosquito on my arm then together with Reiner I raced down between the dark palms to the beach.

A bioluminescent tide had washed up against the shore, it’s invisible microscopic creatures unconcerned with my wonder.

Dear reader, this is truely wonderful experience, so exotic it’s a challenge to describe.

Darkness hides, but the wet becomes a living thing creating glowing shapes as your legs wade in the molten blue.

That to which the wet clings to emanates a ghostly light, imbuing my lower calf with its transient radiant profile.

Gleefully i threw handfuls of wet stars to the night, each a momentary glowing drop of mystery. Splashing back into the water each drop recreating an incandescent ripple, not of fire but of my amazement.

The Fokker F27 Friendship is a turboprop airliner developed and manufactured by the Dutch aircraft manufacturer Fokker. It has the distinction of being the most numerous post-war aircraft to have been manufactured in the Netherlands and also one of the most successful European airliners of its era.

Mine stood baking on the soft tarmac at Colombo’s Bandaranaike International Airport. The flight was a mere hop across the Gulf of Mannar to Trivandrum in Kerala and to customs inspector Sri Lakshmi Sangahr, but that’s the next story.

I buckled down for the takeoff and with a roar we took to the blue.